IT’S ALL HAPPENING IN AVORIAZ THIS WINTER!

In the last couple of weeks no fewer than three brand new events have been announced for Avoriaz this coming winter. Chalet Beatrice is just minutes away from the super-quick Ardent Telecabine, one of the quickest ways to access Avoriaz during your Morzine winter ski holiday.

We’re very excited that this sister event of the legendary Snowbombing festival is to make Avoriaz its home. For the first time we’ll see acts such as Dizzee Rascal, Bondax and Wilkinson live at 1800m, and you can too! Transition Snow wristbands will be available to holiday makers staying elsewhere in the Portes du Soleil so you can treat yourself to a huge night out.

Crashed Ice is one of those sports that’s crept up on us over recent interviews, maybe because two of the sport’s best athletes come from Morzine and Les Gets. In a nutshell it involves ice skating down a frozen solid boardercross course, racing three other athletes to the finish line. Avoriaz hosts a stage of the Crashed Ice Riders Cup in January next year and we’ve heard the course runs through the very centre of the resort.

A second huge music festival arrives in Avoriaz this winter. On the Snowboxx lineup so far you’ll find Mike Skinner (of The Streets), Grandmaster Flash and Sigma. Snowboxx also promises a succession of special events and a real festival atmosphere in Avoriaz, and since the festival coincides with the Portes du Soleil’s well established Rock the Pistes festival, you’ll be spoilt for musical choice during this week!

If you’d like to stay with us here at The Edge Morzine during one of these action packed weeks, you can check our availability or send us an email with your enquiry.

Paul D
Wonderful stay Even though we only stayed one night we could not recommend Lyndsey's chalet more highly. She was very welcoming and the evening meal was delightful. The accommodation was clean and cosy and we would highly recommend a stay and would be more than happy to go back again.

briony p
Beautiful chalet Lindsay made us feel so welcome and at home here, and all of our meals and breakfasts were lovely. Lindsay takes you to the ski areas and picks you up if you have the fully catered option, which is far nicer than taking the bus. Lovely hot tub for the afternoons after a days skiing, and nice communal living area with a fire and plenty of seating. Location for us was perfect, although a little walk into the centre of morzine it didnt put us off at all, also a few bars closer to the chalet if you dont fancy a walk. Our room was lovely with its own balcony, and a nice big boot rooms for all your ski gear ,10/10 would recommend.

Chris
Delightful chalet with friendly host Chalet beatrice is slightly set away from the main areas of the ski resort, but don't let this put you off! We stayed for 3 nights and couldn't have been better accomodated. The host provides a shuttle service to some of the closest entry points to the ski area which mean we were never waiting more than a few minutes to depart or return to the chalet. Almost as good as ski-in, ski-out! Facilities wise, there is a good sized hot tub, a good boot room (with useful facilities for drying wet clothes) and a phenomenal split-level living area with lots of seating and a cosy fire. We enjoyed the breakfasts provided and dinner, while provided by an outside caterer, was also of a good standard with a great cheese course to finish each night. Rooms were of an OK size, although our bathroom was a little small. Bedding, towels etc were all of good quality and comfortable. The only minor downside we experienced was that the showers weren't very good at maintaining a constant temperature. We would not hesitate to recommend to others!

Daniel
Superb in every way 5***** Chalet Beatrice is a truly top class chalet with a wonderful Owner / Host (Lindsay). The chalet is set apart enough to give that sense of isolation but is in fact close enough to Montriod Village centre which has a fantastic Pizzeria, small pub/bar and Ski Hire shop etc. Montriod is equidistant from the Morzine and Ardent ski lifts, which Lindsay was happy to shuttle us to and from each morning and afternoon, meaning we could maximise our time on the slopes, which given we were there for only 3nights made all the difference! We shall definitely return!

Sennenboy
A beautiful chalet, and first class service We were given a warm welcome by the owner Lindsay at Chalet Beatrice which nestles in the heart of Montriond, a traditional French hamlet, with easy access to the Portes De Soleil. The chalet with seven double bedrooms is beautifully designed with a cosy wooden interior, large wood burning stove and panoramic windows with views across the mountains. We stayed B&B, warm croissants, scrambled eggs, cereals, toast and charcuterie, but you can opt for the full board option and there is a varied evening menu. The rooms were very comfortable, and we especially enjoyed the outdoor hot tub after a long day on the piste. Lindsay also delivers you to the slopes and picks you up, if you don't fancy the ski bus. Montriond also has bars and restaurants within walking distance of the chalet. Highly recommended, we would definitely stay again.

Marta
One of the best Chalets in the area Chalet Beatrice is one of those places you never forget. The house is absolutely beautiful and warm. Even the rooms could seem small when you see the photos, the truth is they are more than enough for two people and are tastefully decorated. Everything is more than clean and will make you feel like at home. Additionally, Lindsay (the owner), is an excellent host who will make your stay unforgettable. She prepares an excellent breakfast and cares about your transfers to the ski lifts. Without any doubt it is one of the best chalets in the area and will come back soon

Shane C
Stunning Chalet This Chalet is in a great location for accessing Morzine and Montriond. Stunning views up the Montriond valley and great views of the Pleney from the hot tub. Comfy beds, clean, Bike friendly and excellent breakfast. What’s not to like. The lady owner is delightful and a font of local knowledge. Just book it!

Thom O
A luxury stay This is a beautifully designed and comfortable chalet with beautiful views from the spacious communal areas, hot tub and sauna to unwind at the end of the day. The owner, Lindsay is kind and patient with her clients, enthusiastic about the area and goes above and beyond to cater for everyone's needs. Access to multiple different lifts and only a few minutes to the centre of Morzine it is well located. A thoroughly enjoyable week here with friends, would certainly come again.

Rob G
Superb chalet with amazing service Greeted from the start of our skiing week by the lovely Lindsay. She is an amazing host, chef and driver! Inspirational levels of energy!! The chalet itself is a work of art with beautiful communal living spaces. The views are amazing, the hot tub perfect for relaxing and the fire is fantastic. All in all I have left after a great week of skiing, full to the brim with excellent food and very relaxed. Thank you.

Duncan G
Would Recommend Lindsay, the hostess, made us feel at home straight away. Breakfast was ready when we woke up, she ferried us to and from the slopes with our kit, and the hot-tub was always on after a decent day on the slopes. Would recommend for anyone looking for a relaxing getaway.

Also on the blog… 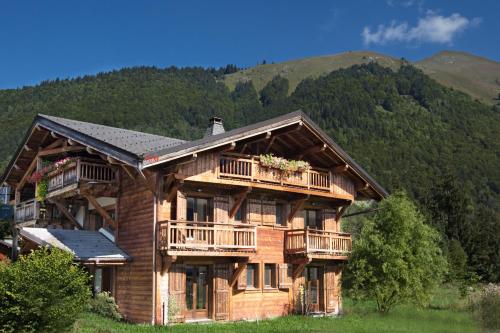 Chalet Beatrice
8,8
Based on 27 Booking reviews.

Sydney
7,0
☺The friendly environment ☹no microwave in room or accessible kitchen area, convinces store, we’re none existent in montriond and without a car. We didn’t want to walk too far!